For the Record by K.A. Linde 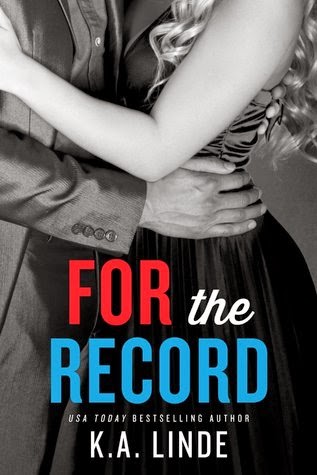 I completed 'For the record' a few weeks ago. I wouldn't blame the length of time I took to read this, on anything else, but myself and the book slump I have been in as of late. Too many disappointments had me taking a break.

Still, 'For the record' was another good novel in the Record series, even if it was more tame than the others.

It's life after going public, as Brady and Liz try to acclimate and build a future around scandals, lies, doubts and one tenacious red head and her misplaced hate.

I find that this novel was more about family and politics. Even though they were suppose to be tackling their own demons, this novel was smooth sailing for Liz and Brady, with a few minor glitches.

The mystery was gone, so we focused more on the politics and everyone else surrounding the characters; namely, Savannah and Clay. They were like an old married couple giving out advice. It wasn't the intricate story line I expected and I saw the main wrench miles away!

Though I must give a nod to Callie's master plan, because it had me guessing to the end. It was a good, well placed and underhanded one. Still, the reveal could have used some work and her misplaced hate for Liz bored me.

Liz and Brady peaked as characters, so 3/4 of this novel was about politics. I wasn't disappointed though, because I enjoyed getting to understand and see the behind the scenes of a political campaign. I prefer a new course to a forced romance.

For those sex fiends, I'm sorry to notify you that though there is sex, it's nothing to get excited about. It mostly happens in a bed and Brady is the definition of white collar sex. Hot or not, without the hiding, he's a plain mama and papa kinda guy!

Liz got lost for me. She felt cookie cutter, especially towards the end and while I get that this novel was about transitioning, I wish she was a little more dominant than the one time she put Heather in her place.

'For the record' was an excellently written novel with a stable story line and steady progression. It brought closure with continuity and introduced us to a host of possibilities in continuing the series without Liz and Brady at the helm.

K.A. Linde has yet to fail me on delivering a solid novel and though not what I expected, I adapted and enjoyed it. I would recommend it to those who aren't sure about finishing the series or those new to the series and are looking for a well-written political novel.